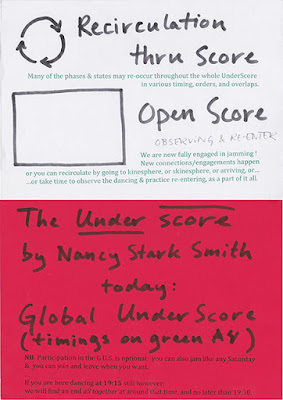 It has already been almost a month since the Global Underscore; sorry this contribution is so late. Also it is a pity we did not take pictures, but… we did turn the day into a successful little experiment in Amsterdam:

The G.U.S. worldwide timing happened to almost match our weekly Saturday Amsterdam Jam…
So for this occasion we had extended the open jam time, to offer the possibility to dance a full Underscore in coexistence with this regular jam.

Everything about the Underscore was optional. It is important that one could still also just jam like any given Saturday; join and leave whenever you liked etc. …because I believe the regularity of this jam to be the life-blood of CI in Amsterdam or even The Netherlands. Only we asked everyone who would be dancing at 19:15 to join in finding the “resolution of the whole room”, an ending of the dance, together…which worked out beautifully.

The class before the jam transistioned into the assembly. After this the talk-through was held in the hall-way, where an annotated version of the Underscore’s phases/states and meetings hung on the wall, so that the regular jam could start undisturbed.

Inside the jam-space copies of the same A4’s (but without the annotation) were hanging from slacked lines, like washing-lines or birthday-day decorations of the room: the Underscore’s phases in red, the meetings in yellow, and the anytime all-of-the-time aspects were mixed in on blue A4’s where the two lines crossed. It all in all looked joyously festive.
The centre of the room was marked with a piece of tape; from there the NESW directions were marked on the walls. (I myself really enjoyed this idea: it really gave me a feeling of global orientation in the jam, knowing / noticing when I moved North, or East …toward Germany …or toward the ‘South-side’ or the ‘West-side’ of the jam : ) 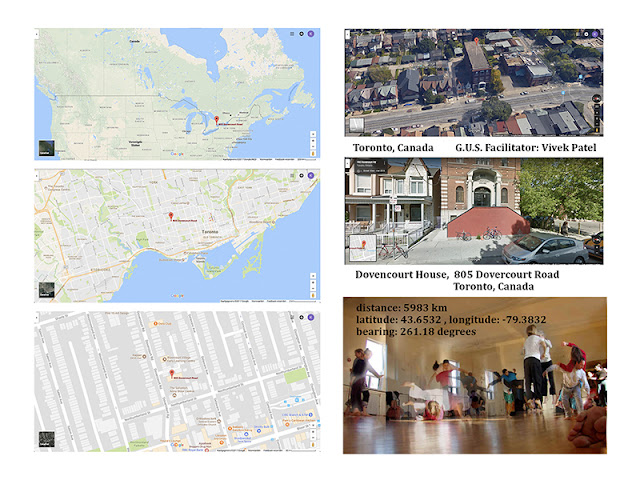 Just off to the left of the West-A4, hung an A3 with information and pictures of the location of the Toronto GUS-site, taken from the internet …Also thanks to this / internet I feel like Vivek Patel and I became distant friends on this day. Likewise, just to the right of the East-A4 hung information about the Leipzig site… I already knew Uli personally! 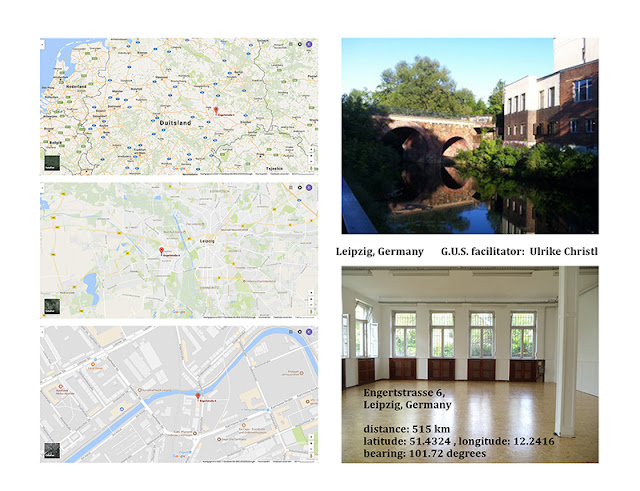 Central inside the studio hung the GUS Google-maps of the world and these 3 green A4 with the main timings of the day (which were also
hanging in the hall-way and in the “birthday-decoration” of the studio.) Everything was optional, only of those of us dancing at 19:15 in this
we did ask to all join the final resolution of the room.


Sharing …fruits of the Harvest: In the sharing there was lots of praise for Nancy Stark Smith’s Underscore. … The dancers had enjoyed the overall focus it brought to the dancing, and that dances link together in it so that it didn’t feel like a collection of separate dances …the unity of experience and the experience of a unity.

Several dancers particularly recounted that powerful moment of the first ‘stand’ at 16:50, the first Small Dance of today’s Global UnderScore. …NB Also this stand had been optional: it was certainly allowed, even welcome, to just jam on and stick with your momentary dance in the regular jam during these few minutes. Yet the stand did bring up and draw together everyone in the room and we were eventually all standing, facing generally East toward Leipzig Germany. (At the moment of the sharing, we of course hadn’t yet faced Toronto too.) I really liked how one duet in front of everyone standing went on, for a long time in an extended lift. I could just imagine they would just dance on, and that would also have been beautiful, but then they found an even more beautiful way to transition: to standing, only just leaning together lightly still, and eventually each into their own individual small dance …with the rest of the world. 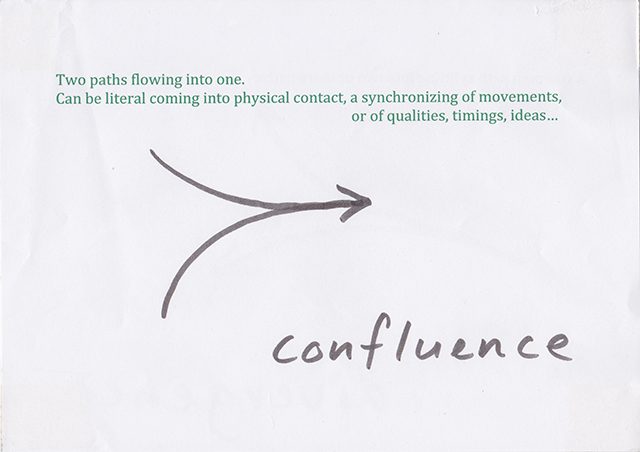 If there is confluence of ideas: The Underscore and the Amsterdam Jam did confluence on the day of the GUS ! …or maybe it was only a tangential moment: after all aren’t we already, the other 51 weeks, and each year, the Saturday Amsterdam Jam. Anyway: it did feel to me like worlds were coming together, or like we came together with The World …and some new dancers have been introduced to the idea of the Underscore.
My conclusion, based on my own experience and the sharing:

All in all it was clear that the Underscore had very much been experienced as an Underscore, and that the GUS had been experienced as a special occasion. …This had been the intention, of course, yet it still pleasantly surprised me or relieved me: I had always thought one of the decisive factors of an Underscore feeling like an Underscore is that, differently from many jams, everyone is in it for the whole duration from the start to the end. It probably indeed is. And of course this group at the sharing had been. But it was good to find out that also through the coming and going of the other Amsterdam Jam dancers, we all had experienced very clearly an Underscore. …I personally believe the (Global) Underscore this year could flourish better than ever in Amsterdam, thanks to this coalition with the weekly Saturday Amsterdam Jam: the jam had a brought more dancers together than it, or maybe either, would have done on its own …The regular jam as such had a positive influence on the Underscore, and I think also the other way around: more than a co-existence, it has been a successful symbiosis. Of course “symbiosis” or “confluence” is relative here: because we already were and still are, all of us, the Saturday Amsterdam Jam !_________________________

It’s been a joy again to occasionally do something extra with and around the Amsterdam Jam +It is inspiring me to do something such again in the future... Thank you all very much!

Flyer-fronts of the four “Amsterdam 4-day CI weekends”, as organised around the Saturday Amsterdam Jam between 2013 and 2016. [Besides these also smaller things such as Christmas & New Year Jams were organised around this jam, and a 12:00-24:00 experimental jam-plus-workshop-Sunday for which the CI-community and some teachers from Brussels/Belgium were invited in 2014.] … Hopefully another, similar but different, international event can be organised around the Amsterdam Saturday Jam again soon: probably in 2018