Home/Uncategorized/Sharing from Malaysia
Previous Next 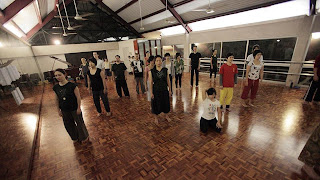 Facing Perth from where we are 🙂
Photo by David Lim
This is the first time we participated in the Global Underscore event in Malaysia.  Many of us were new to the underscore, and some were even new to Contact Improvisation.  However, that did not stop us from being part of it.
Most of us traveled and arrived geographically on Friday night and meet one another at an open Jam. On the following day, we all arrived together as a group for the first time, both energetically and physically (at 9:30am) to begin a briefly guided through underscore practice.  Then after, we had a brief talk through of the score (it was an experiment in regards to prescriptive and descriptive aspects of the practice).  In the afternoon, we continue our practice with a silence Jam, having the underscore as the frame for the Jam.  The practice seems to stir some curiosity about “the score”, which opened a few discussions that I had engaged with some.
On Sunday morning, we continued our practice and it is nice to observe (perhaps just my imagination) the curiosity that was stirred before was transformed from mental to physical, which makes me wonder about the prescriptive and descriptive aspects of the underscore practice.  Anyway, Sunday night, between 9-9:30pm, we each began our individual arrival, each embracing our body-time while adjusting it accordingly to the clock-time till we gather at 9:30pm in the studio.  At the Pow-Wow, we each randomly picked an aspect from a stack of 86 cards made from Mike Vargas 86 listening aspects.  And we began the Jam from 1-2 minutes of listening before we perambulate. We “survived” the Jam till 12:15am when we resolved.  After which we had a sharing.  At the sharing (as it has been a practice that I had experienced with Nancy), I opened an invitation for all to continue arriving energetically and physically for a week at 9:30am (which is our first arrival at Rimbun Dahan).  At around 1am, we were all at different places within the compound of Rimbun Dahan, and we did our individual small dance facing northwest to give the Global Underscore of 2013 a “.” (fullstop).
Most people at the modified Jam are still at Rimbun Dahan for the Kuala Lumpur Contact Improv Festival which is right after the Global Underscore.   It is nice to know that I could still arrive physically and energetically with them even though I had depart geographically from the place.
The practice continues…till the next time 🙂
As always, the departure opens an opportunity for the next arrival.  🙂
Yeong
By Patrick|2013-06-27T07:21:00-04:00June 27th, 2013|Uncategorized|Comments Off on Sharing from Malaysia