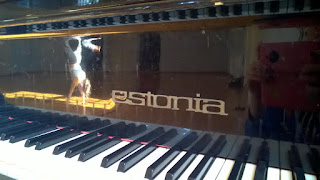 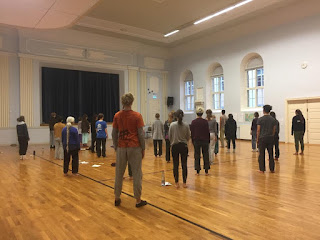 We were in a gorgeous big school assembly hall, with renovated wood floors, high ceilings, a balcony and high stage, freshly painted bluegray walls, and a deck outside that overlooked a beautiful grassy hillside with lovely wooden houses, sloping down to a large and always-inspiring lake. Big trees on the top edge of the hillside blew musically throughout the Underscore. Peonies are blossoming now and we brought several stalks of white ones into the corner of the space in a large Roman-looking urn that mysteriously showed up in the space during our workshop earlier in the week.

The maps and lists and Underscore pages were on the wall, snacks in the hall, art supplies in the corner by the peonies.

No one came to the computer for Real Time Harvest or Live Harvest during the dancing!!

Here is a live transcript of our Final Sharing Harvest and some photos.

Thank you, Nancy Hughes, Brandin Steffensen, and Patrick Crowley—our Global Underscore coordinators—for your work in bringing us together this year. It felt strong and more important than ever for us to connect worldwide, in real time, through our dancing.

It also felt important to acknowledge in this Global Underscore the call for more open discussion within the worldwide CI community about restrictions of freedom occurring in the world based on ethnicity, race, religion, nationality, gender, and other political and cultural conflicts. Can and should CI, Underscore, and Global Underscore flourish in an a-political framework? How and where do political and moral stances have a place in our CI, improvisation, somatics, and dance world and work?

Thank you, Penny Chivas and team in Glasgow, Scotland, for exposing and weathering the first harsh winds of dissent of your Global Underscore site (based on the fact of there being an Israeli site in the network!), and then thanks to Nicole Bindler, Dan Bear Davis, and Lailye Weidman for their work on a petition and video conference about political consciousness in the contact improvisation community. I look forward to a report in CQ on these conversations, perhaps in our CI Newsletter Online where there is a place for Comments.

That said, I felt again the power of our nonverbal practice— to be confronted, over and over again, with “difference” and contrast (styles, backgrounds, intentions) within the dance space, and cultivating the practice of finding generous, creative, inventive solutions. Hard work. Good humor.  Serious study. Joyful play. All at once. What a composition that is!

With love and appreciation to all who participated in this year’s Global Underscore.
xoxo Nancy SS 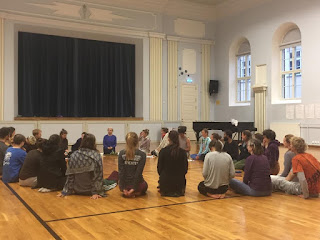 (transcribed live by Kaisa and Anne, thank you!)

Ienni (Finland)
I would love to sing a song
I am a bad singer
it stays in my mind:
All I want from you is forever to remember me as loving you

Angela-Mara (Germany)
Hamburg, Köln, where my friends are
feeling a lot of different emotions at the same time
Final Resolution hearing the sound of the rain and the sound of people drawing

Tatjana (?)
a long and multilayered journey
being with my body and the composition at the same time
it’s a game between recording the things around me and staying here in my body
it’s very subjective for me
When you meet a person, you meet a whole world. You can communicate and get know it through the movement. It is therapeutic.

Sini (Finland)
my uncle passed away this morning, so i was orientating globally, cosmically. Forms appearing and disappearing into light and then it didn’t make sense anymore. Final Resolution: light.

Alexander (Portugal/Sweden)
Many states today, another long jam, right now a feeling that I can’t really recall what happened. Was fun, intense, slow. Very absorbed in myself, sometimes out of my self. Always needing to let go to step into something next. There’s freedom there, I feel, with the work that we did. There’s a bigger picture, wholeness.

Barbara (France)
Gratitude. I wonder if grace and gratitude have a connection. I liked to see and give generosity, How dance is generated through movement. It’s about giving and taking. Was a good seed. I found humor in my dances. I went through very different phases, looking very close to the floor, trying to look very far, contrasts; looking around. What I find in underscore and dance, it’s the density of time because of the awareness of space. Time flies and at the same time it’s expanding, fullness. I was very nourished from the week, not only the workshop, but walking here, eating, swimming, watching the trees, flowers, the wind.

Victoria (Ukraine/Finland)
I feel very close to something super important of my life. CI came to my life one year ago; before, I did other things. I never saw dance as anything then. I wasn’t sure about it. Then contact happened and I met many great teachers and immediately all the puzzles came together. It’s something that can transform you so fast, compassion, practice, wisdom practice, presence, freedom. Combination of all this. I feel WOW. Thank you.

Nancy (USA)
I want to check in about time. I’m feeling the stress about the time. Could we break the rules and continue around the circle after standing, so everyone has time to talk?. [All agree.]

I was very intrigued with the open space gap we had after the Assembly. We had 10 minutes to do nothing (having finished all Assembly activities earlier than expected). I liked that—the unexpected and undesignated space.

I visited each site around the world as I stood facing Moscow in the Opening Stand. Starting with Moscow, I found myself hopping to each site (having almost memorized them from writing them several times for the wall), visiting for a moment, looking around, saying hi to some people I knew were there, then hopping to the next. Such a strong feeling knowing that they were actually there, right now, standing, facing the next place, and we were in this together.

Ann (France)
Being connected to the planet, learning to find my ease in the uncomfort and releasing into what welcomes me.

Antti (Finland)
I had one of the most difficult beginnings ever
emotional outburst
this time confirmed to me the old truth
to trust the body, the movement, to find expression
movement is a way to regulate the emotional state
the emotiomal state became a compositional element
I was suffering and enjoying at the same time
not having any touch for the whole jam and finding a deeply connected dance at the end

Lara (Austria)
Sweat and tears are both salty.
I feel like cancelling the date with the earth/world.
Itchy feeling from inside, like i am scratching my skin from the inside.

Elina (Finland)
I had this moment outside, watching the trees, those impressively big trees. Suddenly I saw that each of them was dancing their small dance, then i came inside and had my small dance.

Nadja (Finland)
I have a lot to say. I enjoy the undescore, i wasn’t expecting anything. But in the warm up you said that just be in the space. I opened the movement to the body.

Each couples I had, I had really nice dances today, and I thought why it happened. There were many things. Most important was Arriving, that i could arrive before I start the dance. I also enjoyed, and the most important thing: trust the kinesthetic feelings of the body. Concreteness in the sensation of the body. Trust the body. I found this week, it has been like meditation, lots of confronting my own obstacles. Contrasts was happening this week. Most important thing was that when I had these processes. And allowing people to be how they are.

Janika (Estonia?)
I want to say thank you. Now I feel the pain in all my body, I needed it. That’s important moment for me, the small dance. It’s inspiring, all the people in the world. And i want to say about coincidence. There is a shoe holding the door open, like someone should come in.

Toni (Finland)
This nourished me:
the colour yellow, toes, flashes of smiles, dryness, the smell of sweat, cucumbers, friction, ignorance, pencils.
Concentrating on the things that nourish me.

Marta (?)
It wasn’t easy for me. I have done some CI, but i felt that i coudn’t open up. And the voices in my head were saying many things.

Lydia (?)
I said about losing myself to the information. I didn’t expect that today. I already found myself. About coincidence, there was one moment, when I found myself with three red shirts. I don’t know where they are right now. Was fun.

Merle (Estonia)
I feel today many beautiful moments, I surprised myself, because my body wanted to move very different ways, i just let it go and some moments I don’t understand what my body is doing. And there’s lots of energy and power and freedom. And after when I go out, then I understand better.

Helinä (Estonia)
When we did facing towards other coutries, it was interesting to feel the other place, almost seeing the backs from the other countries. And then here hearing the names and countries and people are still similar, from so many different places. Still doing the same stuff. I had a lot of different emotions, sensations and qualities; we started to laugh at the same time when the ear of the vase came off and it was interesting to feel that happening.

Kadri (Estonia)
I had skype with two friends of mine, from Brazil and Kyoto. When we started you were telling about the countries. Why didn’t i tell them! We could have met in the undescore. Small dance was very important and that it happened in the beginning and end.

Helin (Estonia? nonworkshop woman)
When people started this thing, I was very energetic, let’s go! But when we did the small dance, and we were facing Russia, then it changed. I didn’t know what i was doing, I was scratching the floor. That was that. I don’t know why, but i was really egoistic, i wanted just my personal space. I tried to connect with wall and it didn’t work. I sat in the corner and was painting, i took some pencils and was drawing. Many different emotions, when i watched everyone. Maybe one day i will show what i draw.

Anne-Mari (Estonia? nonworkshop)
Ci is always understanding and others better. Who am I and who are others, thinking of do I see who they are and who am I? And also curiosity. Freedom. Also i was thinking if there are some people who need more, stronger, impulse to move and other people need less impuls. Is it so, or? And with few people that we were moving like one body. Remembering my own body, I am here, trying to look it from one step away.

Tina (Montreal, Canada)
I was thinking, feeling, different states, and in the global sense I was curious about global and local, about permeability, sensing borders, boundaries, how sometimes there is free trade and sometimes heavily guarded borders. Seeing if it’s possible to sneak across the border and retreat when it’s too dangerous.

Danat (Riga, Latvia)
Thank you all of you. For that beautiful moment of healing. I think CI is very great open structure for ideas, movement. We are all very open and excited and fresh and open to the world. It’s a great thing nowadays.

Olga (Riga, Latvia)
It was my first underscore. I had many feelings. Feels like gravity, losing myself, trying to find some connections between CI, contemporary art, some ideas came to my mind, it’s so contemporary but at the same time searching for spirituality like ancient things.
By Patrick|2017-08-05T17:24:00-04:00August 5th, 2017|Uncategorized|Comments Off on